The Inspectorate is a complaints-based agency. It is important that members of the community know which agency to lodge a complaint to and seek advice from, as well as what constitutes a valid complaint. The rise in enquiries and formal complaints shows us that the community feels comfortable raising issues and is aware of our role.

In a non-election year, we receive and address an average of 500 formal complaints a year. In the election period, this number increases substantially.

Those who contact us for guidance, information, or to lodge a complaint had varying degrees of involvement in the election and included councils, councillors, candidates, and voters.

Although not all complaints received related to an offence under the Act, each interaction was an opportunity for us to gain insights into emerging issues, identify trends and areas where education or legislation reform could contribute to higher levels of accountability and transparency at councils in Victoria.

The graph below shows the breakdown of complaint outcomes. Note that several matters are still under review and may progress to investigations. During our assessment process, we: 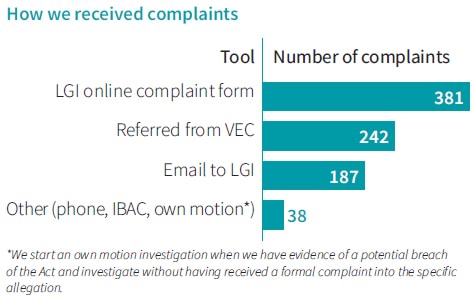 Between 31 August and 8 November, our election complaint form was accessed 922 times, peaking in the week of 5–11 October when 209 sessions were recorded. Our ‘Make a complaint’ page was viewed 1621 times in the same period.

Our office was affected by the State of Emergency which operated in Victoria for most of 2020. For extended periods, Victorians were directed to work from home, where possible, avoid gathering in groups and limit travel. As a result, we had to find new ways to continue to prepare and operate during the local government election period. However, the change in working arrangements caused issues.

From 2–9 October 2020, our office was affected by a telecommunication failure of our main landline numbers and this took longer than expected to resolve due to phone provider issues and the COVID-19 restrictions on movement.

As a result of this failure, we were not able to determine the exact number of complainants whose calls when unanswered during this time. However, complainants were able to contact us through other means such as our online complaint form, email and referrals from other agencies, and advice was provided on our website to indicate preferred methods of contact.

Where we received complaints from

Of Victoria’s 79 councils, we received no complaints about 20 councils (including three under administration where there were no elections) and received 10 or less complaints per council about 37 councils. This meant the vast majority of complaints (78 per cent) related to just 22 councils. Furthermore, 228 complaints – a quarter of all complaints – related to just three councils: Nillumbik, Stonnington and Wyndham. Who made the complaints

The majority of complaints were lodged by a member of the public with the second highest number lodged by candidates, including councillors standing for re-election. About 13 per cent were anonymous.