With elections due to be held for most Victorian councils in October, the Inspectorate has taken a look back at trends and recurring issues from the 2012 and 2016 general elections to inform our work during the 2020 election period.

Reviewing data for the past two elections can identify:

Using this prior experience and knowledge to focus preventative work on people and problems that represent the highest degree of risk helps make the best use of Inspectorate resources. 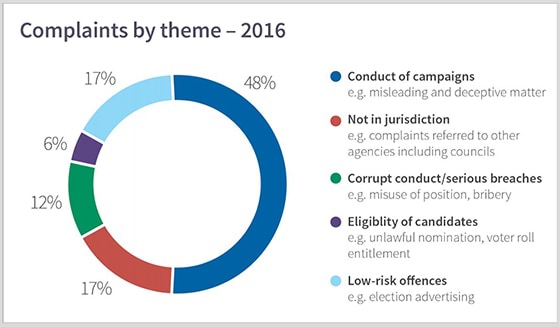 The 2016 elections saw 2135 candidates nominating for 637 vacancies. During this period, the Inspectorate received 2000 enquiries and 409 formal complaints about matters ranging from minor campaign material breaches to serious corruption allegations for activities designed to undermine the integrity of the democratic process.

Many enquiries related to social media posts and the complaints team processed 78 formal complaints on this topic. There was a 43% increase between 2012 and 2016 in complaints about the authorisation of election material, with 40% of all issues raised in this category related to content that was published online. 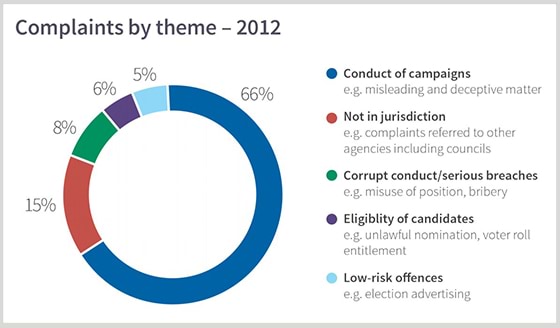 In 2012, 383 election complaints were received in a ten-week period. Seven investigations resulted in prosecution of individuals for electoral offences such as making a false declaration and being an unqualified candidate.

While 76 councils will hold elections this October, all elections in 2020 will be conducted by postal vote and 30 council areas are under stage 3 lockdown until at least 19 August, which may decrease the number of complaints related to electioneering.

The Inspectorate expects the 2020 data to reveal a further increase in complaints about social media activities by candidates and sitting councillors. As COVID-19 restrictions have impacted on traditional street campaigning, candidates will increasingly turn to email and social media to advocate for local issues and in some cases, conduct misinformation or ‘attack’ campaigns against rival candidates.

Also, as the new Local Government Act redefines aspects of a councillor’s role, the Inspectorate expects to receive more enquiries or complaints relating to perceived conflicts of interest by candidates or sitting councillors. It is worth noting the new conflict provisions will not come into effect after elections are held on 24 October.

The Inspectorate will continue to work with councils, integrity agencies such as the Independent Broad-based Anti-corruption Commission (IBAC), the Victorian Ombudsman, and the Victorian Electoral Commission (VEC) on targeting potential problem areas through communications and guidance material before and throughout the election period.